This National Youth Festival and Competition is a four day event, the competitions are a challenging, fast paced and exciting time that is packed full of entertainment and activities designed to engage and stimulate our St John Cadets and spread awareness of the opportunities we provide young people. 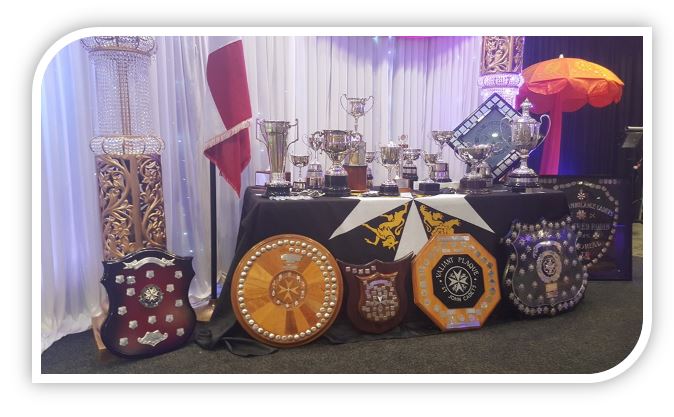 St John is super pleased to confirm the official results of the 2017 National Youth Competitions held in Whanganui on 24 April 2017 at Wanganui College. It was also very pleasing to see that each Region came away with a prize at the National Youth Festival, the results were very close and all of our young people demonstrated outstanding fair play and postive team dynamics which are all essential ingredients to developIing sound leadership and participation attributes.

Individual Communication - Rolly Nelson Memorial Cup
Presented in 1957 by the Cadets of South Auckland for the runner up Nursing Individual at the Dominion Cadet Competitions. It was presented in honour of Mr Oscar R Nelson, OSTJ, who was the District Ambulance Cadet Officer in Waikato. From 1975 the trophy was awarded for the Champion No.5 team member and is now presented for the winner of the Individual Communication.

Individual Test 1 - Allen Wain Memorial Cup
Mrs Enid Gini, CStJ, presented this cup in 1988 in honour of her father, for the winners of the Youth Open Pairs. Mrs Gini was the Regional Youth Officer for the Auckland Region. From 2000 it has been awarded for the winner of the individual event S4.

Individual Test 2 - Barry Cowley Cup
Mr Barry Cowley, KSTJ, presented this cup in 1988 for the runners-up of the Youth Open Pairs. Mr Cowley was the Assistant Director Community Services - Youth. From 2000 it has been awarded for the winner of the individual event S5.

Individual Test 3 - Monkhouse and Kershaw Cup
From 2000 it has been awarded for the winner of the individual event S6.

Runner Up Champion Individual - Canterbury Centennial Shield
The late Mr Wilfred Oliver, SBSTJ, presented this. It was originally for the Individual Dominion Champion Nursing Cadet. In 1975 it became the trophy for the runner-up Individual Champion. Mr Oliver was Superintendent of the Wellington East Ambulance Division.

Champion Individual - Bledisloe Cup
Mr Edward Gilberd purchased this silver cup in Christchurch. The cup became the Champion of Champion's cup for Ambulance Cadets for the Canterbury/West Coast/Nelson-Malborough District. George Mapstone was the first winner in 1933. At this time Lord Bledisloe, Governor-General of New Zealand was visiting Christchurch. He was asked to present the up and later offered to defray the cost of it as a gift. Hence the cup became the Bledisloe Cup. In 1935 the Bledisloe Cup became a national trophy competed for at the National Competitions for Champion Individual.

Aggregate Team First Aid Tests - Valiant Plaque
Presented in 1958 by the Cadets of South Auckland District, this trophy honors the work with cadets by Mrs Dorothy Yarrall, CSTJ, QSM, JP, who retired as District Officer in Charge of Nursing Cadets.

Team Pairs 3 & 4 - R B Coomber Rose Bowl
Roderick Brice Coomber was a member of the Oamaru Ambulance Cadet Division who lost his life in a farm tractor accident in 1963. The Rose Bowl was presented by Ambulance Cadets of the Otago District in 1964.

Champion Team Leader - Gilberd Cup
Presented in 1935 for Ambulance Cadets it is now awarded for the Champion Team Leader. Mr Edward B Gilberd, QSO, KStJ, was Chief Cadet Officer in 1937-1945 and the founder of Cadets in New Zealand in Whanganui in 1927.

Champion Number 2 - Rockell Cup
Presented in 1939 for Ambulance members by Mr Ivan Rockell, MBE, OSTJ. In 1975 this cup became the trophy for the Champion No.2 Team Member

Champion Number 3 - Dawson Cup
Sir Bernard Dawson, KBE, MD, FRCS, FRCOG, presented this in 1949 for the Individual Champion Team Leader in the Dominion Cadet Nursing Competitions. In 1975 this became the trophy for the Champion No.3 Team Member.

Champion Number 4 - Dominion Rose Bowl
This trophy was presented in 1950, and was originally for Nursing Members. In 1975 it became the trophy for the Champion No.4 Team Member.

Runner up Champion Team - Linen Guild Cup
The Linen Guild Cup was a group of women who supplied home nursing materials and supported the Eye Hospital in Jerusalem. The cup was presented for the runner-up to the Barclay Memorial Shield.

Champion Team - Barclay Memorial Shield
Presented in 1950 by Colonel George Barclay, OBE, KSTJ, for the teams Championship-Nursing Cadets. Colonel Barclay was Chief Commissioner in 1904-1943. The shield has on it all his decorations. From 1975 the shield has been awarded to the Championship Team.

On behalf of the St John family we extend to all competitors and also to their managers and supporters a warm and hearty congratulations on a job so inspiringly performed.

To the many volunteer organisers, support crews and to our many sponsors we commend you all for the part you played on providing such an outstanding competition event. We were also very humbled by the strong sense of participation demostrated by all members involved living by and demonstrating our organisational values right throughout the weekend.

Whanganui is the city where the St John Youth programme was first established in New Zealand on the 2nd of May 1927 and still supports a healthy Youth Division today.